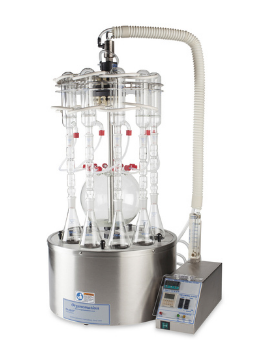 For high-volume testing labs, reducing solvent emissions can be a time-consuming regulatory nightmare. Emissions from laboratories can pollute both the air and water surrounding the facility, in addition to exposing personnel to health risks. The EPA now requires all major sources of emissions to obtain an air permit. A major source is defined as having the potential to emit over 10 tons per year of a single hazardous air pollutant (HAP) or over 25 tons of combined HAPs. It is interesting to note that as an added challenge, these limits are based on potential emissions, calculated as if the lab were operating 24/7 at 100% capacity. Permits are granted at the state level, and additional limits can vary from state to state.

HAPs, as defined by the EPA in the Clean Air Act, include 187 pollutants. Examples include volatile organic compounds such as benzene and toluene, as well as suspended particles such as lead and arsenic. A full list of hazardous air pollutants is maintained on the EPA website. The most relevant HAP to solvent collection is dichloromethane (DCM), which is widely used for organic extractions. DCM is carcinogenic and can cause damage to the central nervous system if inhaled.

Organomation has been helping laboratories reduce HAP emissions through recapturing evaporated solvent since the 1980s. Recently environmental testing laboratories in Massachusetts included our S-EVAP solvent evaporator in air permit applications to the MassDEP. The S-EVAP solvent evaporator is capable of up to 97% solvent recovery through either individual or central collection. In order to make the solvent reclamation process easier for our customers, Organomation has recently developed a continuous solvent drain option to address challenges faced by environmental testing laboratories.

In addition to the tightening regulations, high volume labs also contend with limited time between runs to empty collection vessels, limited bench space, and large amounts of recollected solvent to dispose of. We developed this option on request for a high-volume customer who was running several samples per day, across multiple units, and wanted a more efficient way to dispose of their recollected solvent.

The continuous solvent drain is a modification of the standard central collection vessel. Solvent feeds from each sample to a chilled central flask. From there, gravity drains the solvent to a receptacle of the operator’s choice. This eliminates the need to pause evaporation and empty a collection vessel, leaving the operator free to focus on other tasks.

Some customers take the idea a step further and use steel piping along the edge of the lab to feed the reclaimed solvent from several instruments directly into a 55 gallon drum for disposal. A sample setup is diagramed below:

The unit is designed to take on the challenges of a 24/7 lab. Heat buildup in the collection bowl from constant use is counteracted by a chilled jacket, allowing the bowl to act as a second condenser for any stray solvent vapors that make it through the Hopkins condensers.

Like the central collection option, the continuous drain has a small footprint that does not extend past the edge of the instrument. However, there is no need to pause collection between runs to empty the collection vessel. Individual collect is flexible in that one collection flask can be emptied while the other positions continue to evaporate. The continuous drain does even better; there is no down time as the reclaimed solvent travels immediately to an outside waste receptacle.

Any new S-EVAP-KD evaporator can be equipped with a continuous drain. We have retrofitted several units out in the field with this drain as well. The process is fairly simple—for a standard central collection unit, the flask and water manifolds are the two main parts that would be modified. Please contact us if you are interested in adding this feature to a new S-EVAP or in retrofitting an existing unit. An Organomation technician will work with you individually on a solution to fit your needs.