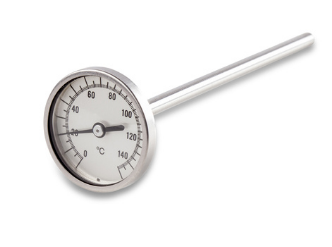 In System # 1, the sample solution contains toluene with a boiling point (BP) of 111o C, water with a BP of 100o C, methanol with a BP of 65o C, residual monomer with a BP of 60o C, and a non-volatile polymer (the target analyte or substance of interest) with a boiling point of "x".  Based on the known composition of the sample solution, the water bath temperature is set as close to the boiling point of toluene, the highest boiling and predominant component, as possible.  The N-EVAP nitrogen evaporator water bath is set at 90o C and the nitrogen flow at 8 LPM. Under these operating conditions, the solvent removal will take less than 60 minutes and the weight of the polymer in the sample will be determined by a simple back weighing of the sample tube. In this instance, a high temperature and a high gas flow rate achieved the desired result quickly and efficiently. The polymer is non-volatile and thermally stable at 90o C, so we quickly quantify the amount of polymer formed and have a representative sample of the analyte for further study and analysis.

A second hypothetical system (System #2) contains a different monomer and polymer, but is subjected to the same processing and analysis as System #1.  In this case, we find no polymer at all; a significantly different result from that in System #1. We are certain that the polymer is non-volatile, so even if it thermally degrades there should be some residue.  However, there is no evidence that any polymerization occurred. If, however, the experiment is repeated and the solvent is removed at 50o C with a gas flow of 8 LPM (taking over 180 minutes) we find a polymeric residue, which can be quantified just as in System #1.  The explanation for the observed result in System #2 is that the polymer is thermally unstable at the higher temperature and depolymerizes or “unzips,” thereby reverting back to monomer which is volatile and evaporates with the toluene and other volatile components of the system.

In a third hypothetical system (System #3), the monomer has a BP of 95o C and a vapor pressure of 42 mmHg at 25o C.  In this case, the solvent was removed from two separate samples at temperatures of 50 and 95o C, respectively, with a gas flow of 8 LPM. At 95o C, the polymer was isolated in about 60 minutes and quantified without any sign of thermal degradation. However, the weight of the polymer was lower than the theoretical or calculated weight for the system indicating that, in this case, the reaction did not proceed to 100% conversion, and that the toluene and the unreacted monomer were removed. On the other hand, at 50o C, the results were markedly different with a weight of isolated residue in the sample tube being above the theoretical or calculated value after 180 minutes. In this case, an HPLC analysis of the residue showed that the unreacted monomer evaporated at a slower rate than the toluene and therefore was present in the residue accounting for the added weight.

The number of hypothetical examples is infinite, and in each case there is doubtlessly an actual or equivalent system. For any given system, the optimal operational parameters necessary for the safe and efficient isolation of the subject analyte or substance of interest are variable.  It is important to note the properties of each part of the sample solution.  In many cases it may be necessary to sacrifice time in favor of sample integrity.  However, temperature alone is not always the answer, the decrease in the evaporation rate with a decrease in temperature may, in some cases, be mitigated by increasing the gas flow rate.  The effect of gas flow rate on evaporation time will be discussed in an article to follow.