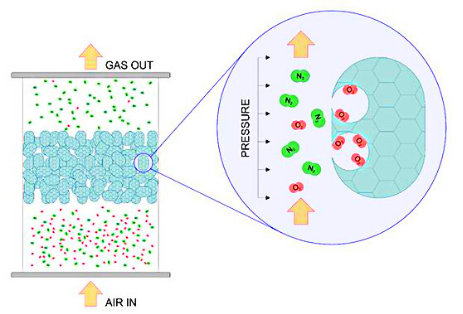 Organomation is proud to announce a new product offering: the NiGen LCMS 40-1 Nitrogen Generator from the Italian gas manufacturer, Claind.

The NiGen 40-1 Nitrogen Generator (Cat# NA1990) relies on pressure swing adsorption (PSA) technology to separate nitrogen from the air. Carbon molecular sieves (CMS) are at the heart of this technology. These sieves have distinct properties that cause air particles to adhere to their porous surface when subject to a set amount of pressure. Oxygen, moisture, hydrocarbons, CO2, and other contaminants are captured by the CMS while allowing nitrogen to flow through to an accumulation tank for use.

The two CMS columns work together in a cyclic process to maximize the purity of the nitrogen gas and minimize potential down time. When a column reaches capacity, and the adsorbents cannot hold anymore captured particles, a valve activates and the pressurization process repeats in the second column. At the same time, the first column begins depressurizing. The depressurization reverses the absorption process, regenerating the CMS, where the captured particles are released from the CMS and are then exhausted through an outlet in preparation for the next cycle.

Pressure swing adsorption nitrogen generators are capable of providing reliable, on-site, on-demand nitrogen generation. The cyclic process enables the continuous generation of filtered nitrogen of up to 99.9% purity. For suitable applications, this can mitigate concerns stemming from delivered gas supplies. No more gas loss during analytical processes and no more dealing with the logistics of needing to store and replace gas cylinders. So, kick your nitrogen cylinders to the curb with Organomation’s on-site nitrogen generation services.