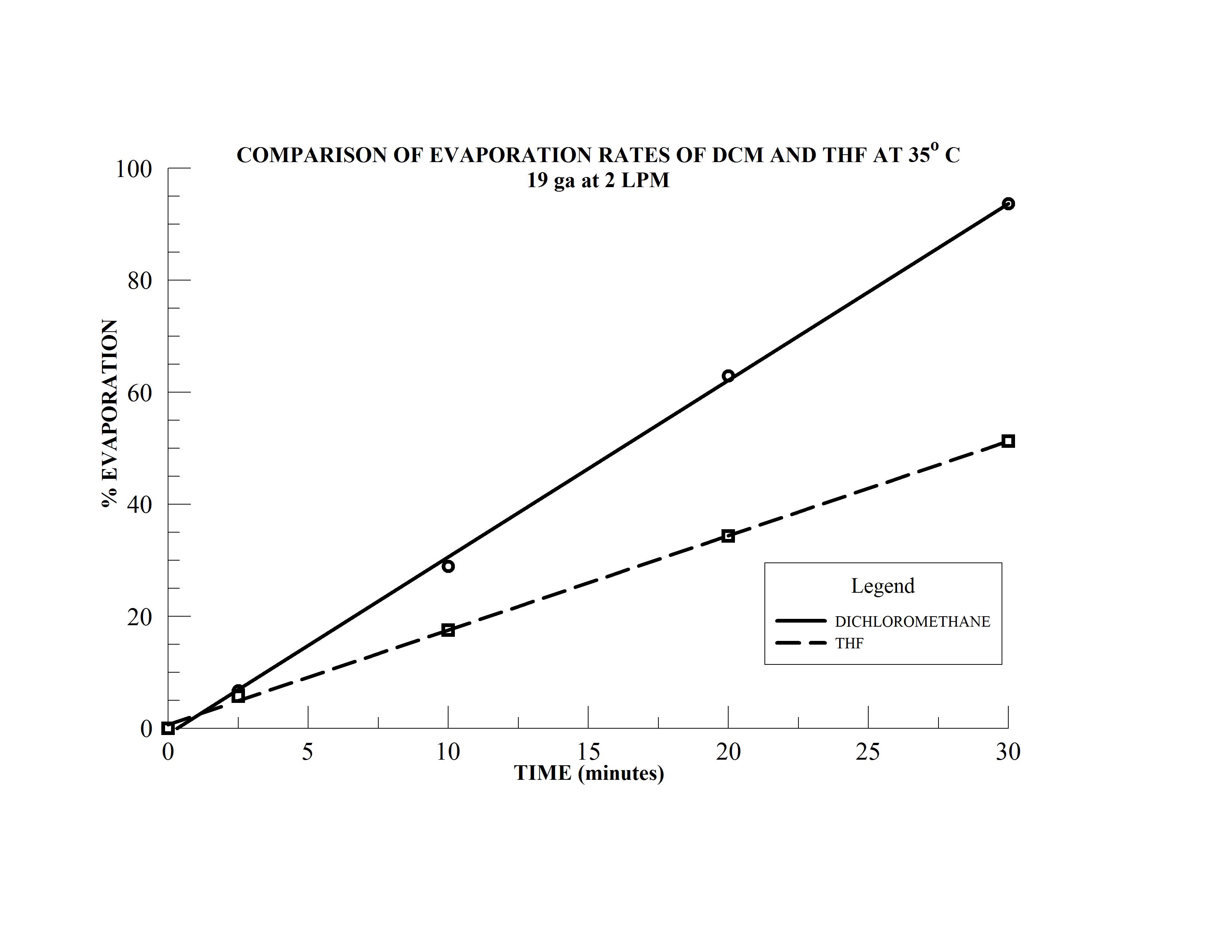 As stated earlier, at a given temperature the optimal gas flow may be defined as the highest velocity at which the gas jet can impinge on the solvent surface without causing excessive turbulence. This being the case there are in essence two potential operational modes (1) a uniform operational mode in which all of the sample vials are identical and all of the samples are intended to be processed in the same manner and (2) an incongruous operational mode in which individual samples are of varying size or composition and therefore require different process parameters. In either case, the optimal settings are determined experimentally.

In the uniform mode the samples are generally equal in volume and contained in the same size sample vials.  In this case the operator places a single sample vial containing a solvent in the instrument. The solvent in the sample vial is adjusted to approximately the same level as that anticipated for samples to be processed. The needle above the first solvent sample is then moved into position approximately 15 – 30 mm above the solvent surface. The needle valves for all positions intended for use are set in the fully open position and are mounted with the same gauge needles as the position containing the solvent sample. With the needle valve in the fully open position and the main gas flow valve closed, the gas source is activated. The main gas flow valve is then slowly opened and gradually increased until the impingement of the gas jet on the solvent surface creates the greatest turbulence possible without spattering or splashing. This will establish the optimal gas flow rate / gas jet velocity for the subject procedure and the laboratory technician should record the specific setting used for future reference. Additional sample vials may now be added without fear of spattering or splashing (since all the positions were adjusted with valves and needle in place and at the same settings).

When operating in an incongruous mode, the sample size, sample vial, and in some instances even the solvent being removed, and the analyte or substance of interest may be different for each sample. In this case the samples may be treated individually by varying the needle gauge, needle positioning and needle gas flow since all of these parameters may be varied with the N-EVAP.

Consider a hypothetical situation in which six (6) samples of varying size and composition are being processed. In this instance: 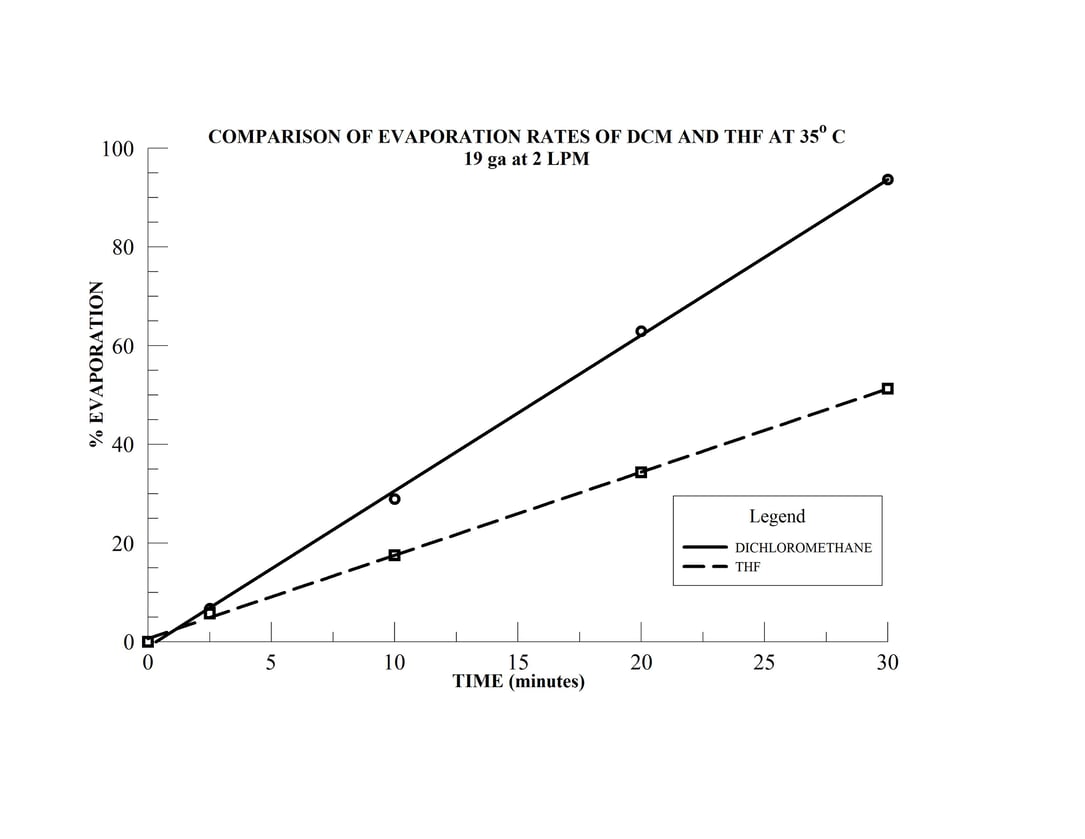 The N-EVAP easily accommodates the variety of sample vial sizes which have been mounted in the carousal and the unit has been fitted with 19 gauge needles. The two solvents, dichloromethane and THF have boiling points of 40 and 66o C, respectively and the bath temperature is therefore set at 35o C. The height of the individual needles are adjusted so the needle is approximately 15 mm above the solution surface in each of the sample tubes. The gas flow needle valve is opened approximately one full turn and gas flow to the first needle is slowly initiated by increasing the manifold gas flow until the gas jet coming from the needle makes a noticeable turbulence on the sample solution surface. The manifold gas flow may be increased to increase the surface turbulence as much as possible without splashing. Sample position 2 is now activated by opening the needle approximately one full turn and the operator will notice that the turbulence in sample 1 will decrease. The manifold gas flow is then increase until the turbulence in sample 1 returns the original level. The gas flow to sample 2 is then increased by opening the needle valve further. Once optimal gas jet velocity has been established, the process is repeated for subsequent samples until all sample positions have been activated.

As the individual samples approach the dry point or desired solvent level the respective positions may be deactivated by closing the individual needle valves, but care must be taken to ensure that the increase in the gas jet velocity and subsequent turbulence in the remaining samples doesn’t increase to the point that splashing occurs. To prevent this “gas jet velocity spiking” it is advisable to slowly close the needle valve at the first finished sample positions while monitoring the turbulence in the remaining samples to see if excessive turbulence occurs. If excessive turbulence occurs the manifold gas flow may be decreased or the individual active position needle valves may be partially closed to decrease the flow. Again, this process may be repeated as positions are deactivated.

As previously noted, the optimum gas flow for a specific procedure is determined experimentally and may then be applied to procedures where the desired operational parameters are similar or equivalent. The operational flexibility of the N-EVAP is the direct result of the independent operational control of the gas flow, needle gauge, needle position relative to the sample surface and the adjustability of gas flow to individual needles. In essence the N-EVAP nitrogen evaporator may be viewed as a multiple position instrument or as a collection of individual instruments within a single system, and when operating in an incongruous mode it is most definitely a collection of individual instruments.