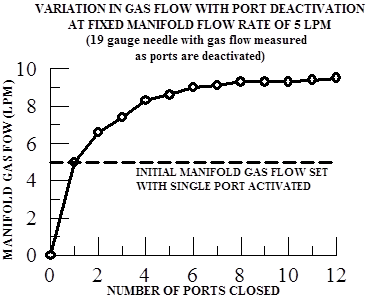 In previous discussions, it was noted that the two key factors affecting the evaporation rate of a given solvent are temperature and gas flow. Further, the evaporation rate of the subject solvent has been shown to increase with a corresponding increase in either of these variables. Increasing the bath temperature increases the solvent's vapor pressure and its volatility so that the solvent vapor collects in the sample holder to the saturation point, while increasing the flow of gas into the sample holder physically removes the solvent vapor.

In many cases increasing the bath temperature may cause thermal degradation of the subject analyte or substance of interest, while in other cases volatility may lead to sample loss. In cases such as these, increasing the gas flow is the only viable option for increasing the evaporation rate.

At a given temperature, the optimal gas flow may be defined as the highest velocity at which the gas jet can impinge on the solvent surface without causing excessive turbulence, i. e., spattering or splashing resulting in sample loss. The primary factors to be considered in determining the optimal operating gas flow for a given system are (in general):

The gas feed rate to the manifold simply regulates the total volume of gas delivered to and distributed through the manifold to the individual needles. This setting should be increased as the number of active needles increases. As an example, a gas feed rate of 3 LPM may be appropriate in a given situation where all the needles are operational, but should be reduced if fewer needles are activated or if some of the needles are taken “off line”. Deactivating needle positions at a fixed gas feed rate will increase the velocity of the gas jet in the remaining, operational needles and may result in spattering or splashing with a potential loss of sample. Conversely, opening additional needles during a run will decrease the gas velocity to all of the operational needles and decrease the evaporation rate.

The needle valves at each sample position are precision tooled and can be adjusted individually. When the valves are in the full open position, gas jet velocity is maximized and as the valve is closed the velocity decreases proportionally. If needles are taken off line, gas jet velocity to the remaining operational needles will increase, again increasing the potential for sample loss from spattering or splashing.

Needle gauge further restricts the gas flow, but in this case the smaller the needle orifice (i.e. the higher its gauge) the greater the gas jet velocity. At a given gas flow rate, reducing the orifice size increases the impingement force of the gas jet on the solvent surface; again increasing the potential for spattering or splashing. 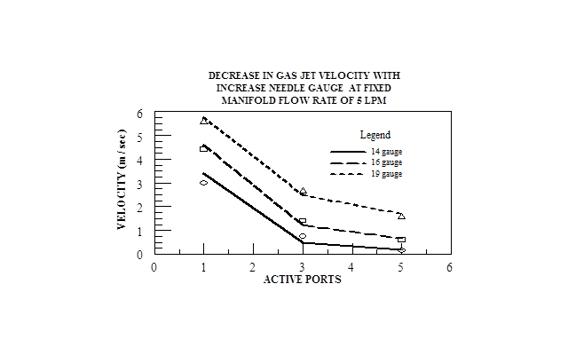 Clearly, the optimum gas flow for a specific procedure is determined experimentally and may then be applied to procedures where the desired operational parameters are similar or equivalent. The operational flexibility of the N-EVAP is the direct result of the independent operational variability of the gas flow, needle gauge, and needle position relative to the sample surface and the adjustability of gas flow to individual needles. In essence, the N-EVAP nitrogen evaporator may be viewed as a multiple position instrument or as a collection of individual instruments within a single system.